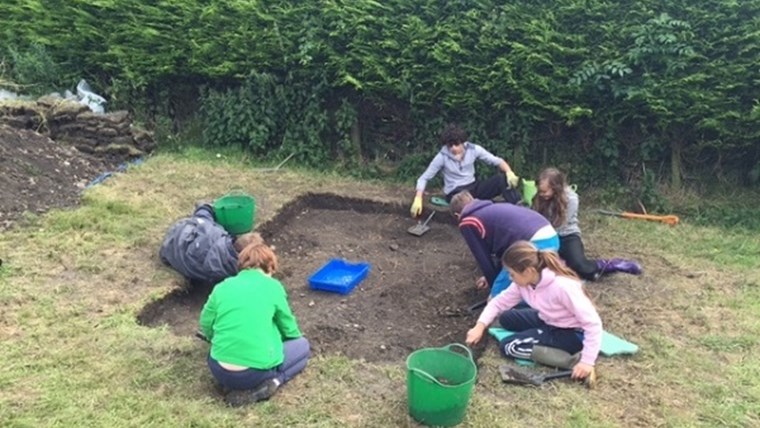 Thanks to National Lottery players, members of the public will have chance to get a behind-the-scenes look at the archaeological dig which is taking place on the site of Skipton's First World War training and POW camp at an Open Day event on Sunday 6th August.

The dig, which is supported by the Heritage Lottery Fund (HLF) and organised by Craven District Council's Craven and the First World War project, will see students from schools across the area join professional archaeologists for a week in August surveying and excavating part of the former Raikeswood camp site.

The site was set up as a training camp for the Bradford Pals in 1915 and was later used as a POW camp for captured German Officers. Students from Ermysted's Grammar School, The Skipton Academy, Upper Wharfedale school, Settle College and King James's School, Knaresborough, will take part in the dig.

There will be guided tours and archaeology sessions taking place on the hour between 10am - 4pm on Sunday 6th August on the site of the dig which is located at the top of Raikeswood Drive and the junction with Raikes Road, Skipton. There will also be a re-enactor on site giving demonstrations throughout the day. The Open Day is free to attend and suitable for the whole family.

The week-long dig follows archaeological excavations which took place on the site of the camp last summer and unearthed a number of artefacts which linked to both the British and German occupation of the camp. These included a trench whistle and a Prussian ammunition pouch belt clasp. Rob Freeman, Craven District Council's  Craven and the First World War Project Officer, commented on this year's dig:

"The excavation will build on the archaeological investigations that took place in summer 2016, where tantalising clues to the camp's history were discovered in the form of military artefacts, but, due to the limited scale of the dig, visible remains of the camp's structures were not unearthed.

"The dig will focus on finding these physical remains and also investigate a possible escape tunnel that has recently become known from the translation of a book of memoirs written by the German prisoners and currently being translated by staff and students at the University of Leeds."

The Craven and the First World War project was recently awarded funding from HLF to deliver a number of initiatives in partnership with the University of Leeds leading up to the centenary of the arrival of the first German prisoners to Skipton in January 1918. As well as funding this summer's dig, the HLF grant will allow the project team to develop a website where visitors can get a look at what life would have been like in the camp through an interactive 3D virtual model of the camp. The finds from the digs will eventually end up on public display in an exhibition next spring about Craven during the First World War at Craven Museum & Gallery.

Rob Freeman added:"The camp is rarely mentioned in the histories of the town (and then only briefly), and the HLF grant allows us to reveal many previously unknown aspects of camp life and return the camp to local consciousness, reshaping accounts of Skipton and its past."

For more information about the project or how to get involved, you can contact the Project Officer, Rob Freeman, on 01756 706225 or RFreeman@cravendc.gov.uk.