Have your Say on Local Government Reorganisation

The Government has launched a consultation on local government reorganisation in York and North Yorkshire.

The councils of Craven, Harrogate, Richmondshire, Ryedale, Scarborough and Selby have submitted proposals for an East & West model of two balanced unitary councils. 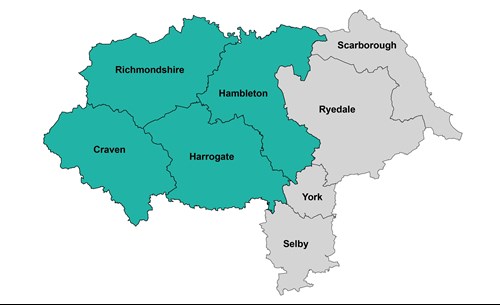 Our proposal is to create two new authorities, set up to succeed for the long-term prosperity of
York and North Yorkshire, one in the East, and one in the West. Each unitary authority will provide
all services to the citizens of each area.

• The East unitary will cover the areas of Ryedale, Scarborough, Selby and York.
This area includes the North Yorkshire Moors National Park, the coast, and key historical
towns and cities, along with a range of market towns and villages.

• The West unitary will cover the areas of Craven, Hambleton, Harrogate and Richmondshire.
This area includes the Yorkshire Dales National Park, cultural and historic attractions within
major towns, a strong agricultural centre and the largest British army base in Europe at
Catterick Garrison.

​The East & West model developed out of a detailed research study and options appraisal, carried out by independent consultants at KPMG. It has also been shaped by the feedback that citizens, businesses, Parish Councillors, voluntary and community groups and partners have provided in engagement sessions, in letters and emails, and through feedback on the Get Change Right website.

​On 9 December, the councils of Craven, Harrogate, Richmondshire, Ryedale, Scarborough and Selby submitted full proposals for change to the government, based on an East & West model.

​You can read the full proposal here and you can also view it below.

​The proposal was supported by a number of detailed documents:

​Implementation plan on a page

The Councils had previously submitted an outline case for change, prepared by experts at KPMG, to the Government on 9th November.

​You can read the outline case for change here.

For more information about the bid, please go to www.get-change-right.com