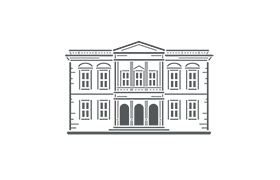 Created in 2004 by its founder and artistic director, Ben Crick, Skipton Camerata - or Skipton Building Society Camerata as it became a year later when it began receiving support from its major sponsor - has since established a reputation for innovative and engaging professional performances.

The orchestra has performed all across the country and in more unusual venues such as Holkham Hall, Harewood House and the Globe Theatre, London.

As well as playing established repertoire works in the concert hall the orchestra has also staged early Mozart operas in pubs, commissioned and performed new works in shopping centres and given 20th century premieres of forgotten works.

The Camerata was also a delivery partner for North Yorkshire Music Action Zone allowing it to run a year-long education programme working with participants aged 4 to 18 throughout the north of England. This combination of traditional and inventive performances has led to it receiving several awards for audience development.

Thanks to the continued support from Skipton Building Society and its other benefactors the Camerata is able to pursue its aim of making classical music at a professional level accessible to the more remote areas of Northern England.

See our What's On page for upcoming concerts.