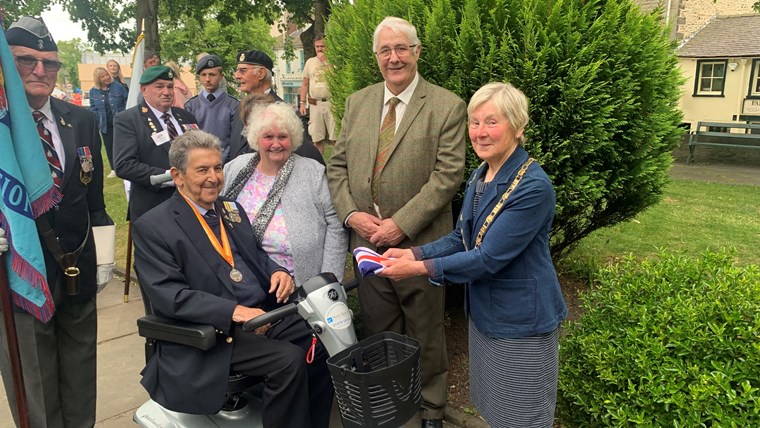 A Navy veteran who fought in The Korean War and who is a founder member of Skipton Royal Naval Association was presented with the Armed Forces Flag, which was raised in Skipton last week.

Sam Bottomley, who joined the Royal Navy in 1950 and saw action between 1950 and 1952 on HMS Belfast in Korea, was honoured with the presentation of the flag by Vice Chair of Craven District Council Cllr Chris Rose.

Over the years Sam has worked tirelessly for the Royal British Legion Poppy Appeal, having been the legion’s chairman for an impressive 62 years.

Armed Forces Week is an annual celebration of the country’s serving officers, cadets, veterans and reservists.

The flag had been raised at a special ceremony at Holy Trinity Church last Monday (June 20th) as the contribution of service men and women, reservists, veterans and their families across the district were recognised. It was taken down after Sunday's celebrations marking the end of Armed Forces Week 2022.

The flag raising and lowering ceremonies are normally held at Skipton Town Hall, however, due to the refurbishment works currently taking place at the Town Hall, Holy Trinity Church kindly stepped in and agreed to fly the flag from their flagpole. The Rev. Canon James Theodosius blessed the flag before it was raised last week.

At Sunday’s service (June 26th), Craven District Council’s Armed Forces Champion Cllr David Ireton, said: “My role as Armed Forces Champion is to make sure that as a Council we consider the needs of all our armed forces community, recognise and remember the sacrifices made by them and make sure that they are treated with fairness and respect in the community they serve.”

Cllr Rose, who welcomed everyone to the celebrations held in Skipton, expressed her gratitude to those in the military serving our nation, as well as veterans. She commented:  “Armed Forces Day is an annual opportunity for us all to show our support to the men and women who make up our Armed Forces Community. Thank you for all those that serve or have served.”

Cllr Rose also thanked the Rev. James Theodosius and Holy Trinity Church for stepping in to fly the flag from the church tower.

After the presentation of the flag, Chairman of the Royal Naval Association, Ben Turpin honoured the outstanding contribution of local hero – Sam Bottomley for his services and sacrifices over the years.

He said: “Sam is a trouper and is proud of his naval history. Since leaving the Royal Navy, he has continued to be involved in any way he can. He is a founder member of the Skipton Royal Naval Association and lifetime President.

“He never ceases to enjoy the company of likeminded people and gets enormous pleasure from swapping stories with those who are interested.”

Following the presentation of the flag, everyone was invited to attend the service for the laying up of the Royal Air Force Association Skipton Standard at Holy Trinity Church.