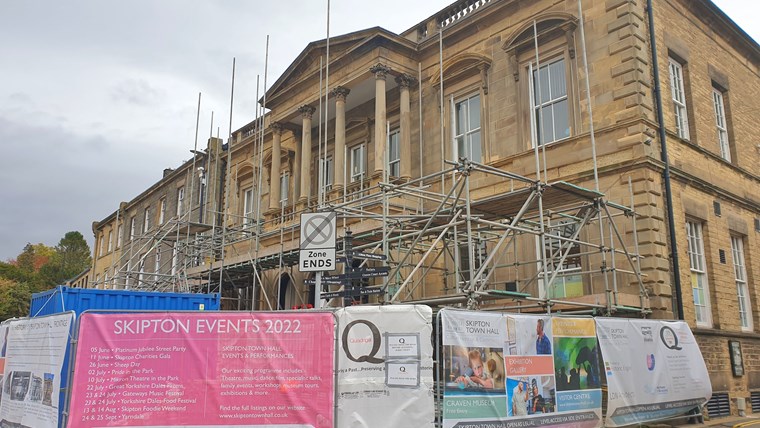 Frontage works to Skipton Town Hall are set to be completed later than planned after a delay in sourcing suitable and matching stone.

The exciting restoration works to the historic Grade II-listed building frontage began earlier this year thanks to funding secured from Historic England’s High Streets Heritage Action Zones grants programme. However, the project has experienced delays in acquiring a specific stone type to replace the deteriorated stone and match the existing colour. Because of this, works are now set to be complete in the New Year.

So far in its latest and final phase of redevelopment, the impressive building – a cultural hub for Craven – has undergone essential repair works to the roof, cleaning and descaling of the front, joinery works and redecoration of windows, plastering and replacement lighting, plus 90% completion of the repointing work to the façade.

Looking ahead, the scaffolding is set to be removed later this week whilst more low-level plastering is undertaken and new hand rails are to be installed. Following in January, the building will also see new doors, along with new signage and the installation of its flagpole. The project will also see refurbished telephone kiosks reinstalled in front of the Skipton Town Hall, along with new furniture and planters to the setts. The kiosks will become extensions of the museum and gallery inside the Town Hall and staff will be working with heritage groups and creatives to reimagine these spaces – so watch out for further news on this!

Skipton Town Hall, which is owned and managed by Craven District Council, opened its doors to the public in June 2021 having undergone a £5million restoration project to the main building. The major scheme involved restoration and refurbishment of the museum and the building of a museum store; and creation of a new build extension for a dedicated education room, dressing rooms for the Concert Hall performance space and additional facilities including a Changing Places Toilet.

Since then it has grown from strength-to-strength attracting esteemed national and international performers who have taken centre stage, helping to draw in large and appreciative audiences to Skipton.

Chairman of Craven District Council and lead member for Enterprising Craven, Cllr Simon Myers said: “The plans are exciting and carefully considered and the end result promises to be something special. While there are delays due to the sourcing of the correct stone, I am pleased to see the completion of the works so far and I am confident works will be complete by the end of January 2023.”

Danielle Daglan, the Council’s Cultural Services Manager, added:” We’re pleased with the work undertaken so far and are looking forward to full completion of the project. We are obviously disappointed that works could not be undertaken all together within the original timeframe, but challenges are being felt across the building sector at the moment and so we will manage the delay as best we can, ensuring the venue looks as good as possible for Christmas and then looking ahead to the final detail completion not long after that in the New Year.”