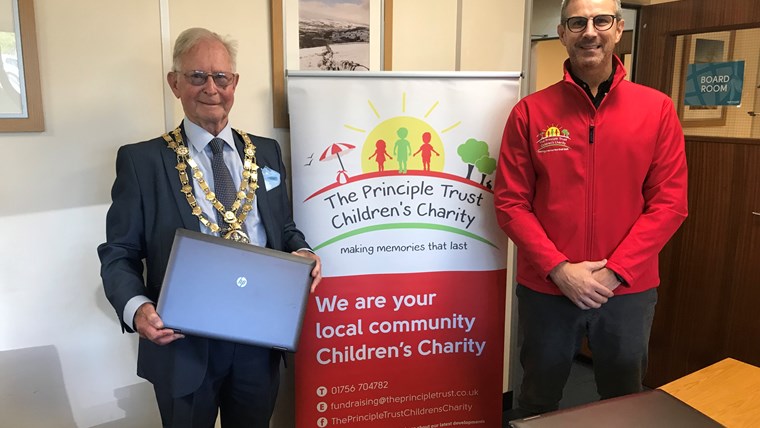 Children from deprived communities in Craven have been gifted some of the Council’s surplus computers following an initiative launched by one of our councillors.

Chairman of the Council, Cllr Alan Sutcliffe, stepped in to ask for councillors’ old laptops to be gifted to his chosen charity after the Council’s IT department completed a scheme to replace members machines earlier this year.

The Chairman’s Charity this year is The Principle Trust Children’s Charity. Its aim is to help improve the quality of life of children from across Yorkshire who are underprivileged, disadvantaged, and disabled through the provision of free holidays.

He persuaded the Council’s Chief Executive Paul Shevlin that the spare laptops should be donated and on Friday, September 17, 25 were handed over to the charity at its premises at Airedale Business Park in Skipton after they were cleaned and wiped of all data.

The charity will distribute them to underprivileged youngsters who would otherwise not be able to afford or have access to the use of a computer.

Cllr Sutcliffe chose the charity over a more high profile one as he wanted to help local people during his year as Chairman.

He commented: “I’m overjoyed we’ve managed to do this after three months of work.

“Instead of sitting in a storeroom gathering dust, these laptops can now go to schools that haven’t got adequate devices or to homes where children are perhaps being forced to share a computer with a sibling.

“Hopefully they will ultimately be beneficial for the career development of children and help them make a success of their education.“

“To add another string to our bow, we have been helping children during the pandemic and donations like this enable us to provide laptops to schools and to young people who are in need.

“Skipton and Craven has an undercurrent of social deprivation where people are missing out so to be able to help here in the local area is of foremost importance for us. Any support from the local authority and business community is a tremendous help.

“This donation from Craven District Council is a fantastic gesture and certainly something we’ve looked forward to receiving.”

Kerry Magson, Events and E-Commerce Manager at The Principle Trust Children’s Charity added: “Last year when children were studying from home it just highlighted that not every child has access to a digital device in order to do their school work.

“Providing these laptops to disadvantaged children in our local community to facilitate their learning and development is a wonderful thing.

“We have a very close-knit group of partners in the community between schools and other organisations, and we will work with them to identify the children most in need for these laptops.”

Cllr Sutcliffe is hoping his idea will be followed up by the other nine authorities in North Yorkshire.