Public given chance to help shape future of devolution 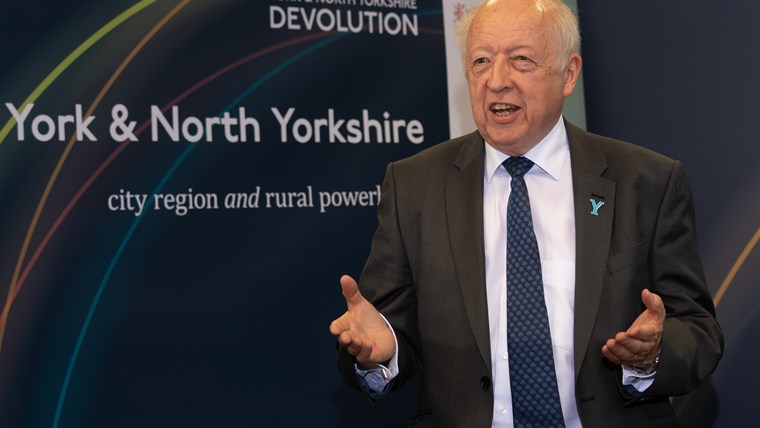 North Yorkshire County Council’s leader Carl Les at a launch event for the proposed devolution deal at the National Railway Museum in York on August 1, 2022

Hundreds of thousands of people across York and North Yorkshire are being given the chance to help to shape the region’s economic future that could bring benefits for generations to come.

A major consultation has been launched to give residents, community groups and businesses as well as academic institutions, charities and voluntary organisations the chance to share their views on a much-anticipated proposed devolution deal for York and North Yorkshire.

The draft deal offers devolved powers and millions of pounds in funding to provide better roads and public transport, improve education and job opportunities, boost economic growth and places York and North Yorkshire at the forefront of the green energy sector to tackle climate change.

Residents are also set to be given the chance to elect a mayor to champion the region at a national level and to help to ensure the Government delivers on commitments to level up opportunities in York and North Yorkshire.

The planned 30-year deal has the potential to bring wide-ranging benefits for future generations to tackle regional inequalities by not only reducing the North-South divide nationally, but also helping to resolve economic differences between urban and rural areas.

"We really need the public to come forward and give us their views on what is important to them and how devolution can benefit communities and businesses across York and North Yorkshire.

“The chance to secure these decision-making powers and millions of pounds in funding from the Government is set to prove a life-changing opportunity for more than 800,000 people who live and work in York and North Yorkshire.

“Devolution will give local leaders the chance to tackle some of the most pressing issues facing people in York and North Yorkshire – whether that be providing more affordable housing, improving skills and education for better job opportunities, boosting transport infrastructure or tackling the climate crisis.

“This is about creating a brighter and more prosperous future for us all, and I would urge the vitally important business sector in North Yorkshire to come forward in particular, as business owners and entrepreneurs will be key in shaping the economy with the benefits of devolution.”

City of York Council’s leader, Cllr Keith Aspden, added: “Given the levels of funding and devolved powers on offer, devolution presents a real opportunity for York not just to secure investment, but also to have greater influence over matters that our communities care about.

“The timing of this proposed deal could not be more important, giving us the opportunity to unlock 30 years of investment to improve economic prosperity, education and transport as well as work towards becoming the first carbon negative region in the country.

“In the next eight weeks, I hope residents and businesses will take the opportunity to engage in this momentous decision for York and North Yorkshire, sharing their views on the full range of proposals.”

Devolution is a key policy of the Government, handing over decision-making powers to local political leaders and providing millions of pounds in funding to shape hugely important policies and projects on a regional level.

The mayor, who would be elected in May 2024 if the proposed deal comes to fruition, would lead a new powerful combined authority that would oversee key strategic projects ranging from major transport improvements to providing more affordable housing and boosting skills and education for York and North Yorkshire.

Politicians and senior officers from City of York Council as well as North Yorkshire County Council and district and borough authorities undertook detailed negotiations with the Government to draw up the proposed devolution deal, which was unveiled on the annual Yorkshire Day celebrations on August 1.

“I’d like to invite business leaders across the region to contribute to this consultation.

“We need to ensure the business voice is heard and that this investment is unlocked to deliver the new jobs and growth across our great region.”

A mayoral combined authority would mirror similar arrangements that are already in place in areas including the Tees Valley and West Yorkshire.

Key areas of focus for the new mayoral combined authority would include unlocking additional investment for the region and supporting businesses as well as growing the economy and improving employment opportunities.

The combined authority would also oversee projects to build better digital and transport connections, along with providing more affordable housing and supporting action to reduce harmful carbon emissions, which contribute to climate change.

Councils representing the City of York and North Yorkshire will remain, working to deliver vital services to residents.

A submission to pursue a devolution deal for York and North Yorkshire was sent to the Government in 2020, and formal negotiations began at the start of this year.

To find out more about the proposed devolution deal and to take part in the consultation, which runs until Friday, December 16th, visit www.ynydevolution.com online.