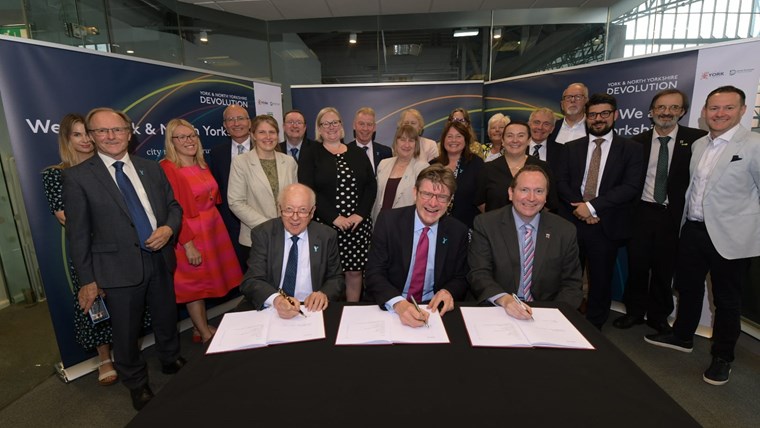 Secretary of State for the Department for Levelling Up, Housing and Communities Greg Clark MP with council leaders and representatives from across the region at the iconic National Railway Museum

Long-awaited proposals for a landmark devolution deal to hand over key decision-making powers while bringing hundreds of millions of pounds of investment to York and North Yorkshire have been unveiled.

The proposed 30-year devolution agreement would deliver funding for key policies and strategies, providing better roads and public transport, improving education and job opportunities, boosting the economy and placing York and North Yorkshire at the forefront of the green energy sector to tackle climate change.

The planned agreement, with which the total funding agreed rises above £540million to York and North Yorkshire, has been provisionally agreed with the Government, and details have now been announced.

Devolution is a key policy of the Government, handing over decision-making powers to local political leaders and providing millions of pounds in funding to shape hugely important policies and projects on a regional level.

The deal for York and North Yorkshire would see the introduction of a mayor for the region, elected by residents of, to lead a mayoral combined authority and forge close links with Ministers in the Government, as well as civil servants in Whitehall. The proposed deal provides the opportunity to invest an £18 million mayoral gain share each year and the mayor would also have access and influence to new and greater funding for the region.

The mayor, who would be elected in May 2024 if the proposed deal comes to fruition, would lead a new powerful combined authority that would oversee key strategic projects ranging from major transport improvements to providing more affordable housing and boosting skills and education for York and North Yorkshire. The deal has been billed as a one-in-a-generation chance to help tackle regional inequalities by not only reducing the North-South divide nationally, but also helping to resolve economic differences that are being felt between urban and rural areas.

North Yorkshire County Council’s leader, Cllr Carl Les, said: “The chance to secure a wide range of decision-making powers as well as bringing in millions of pounds of investment for North Yorkshire is a huge opportunity for us all to shape our own future for many years to come.

“It will make a real difference to the hundreds of thousands of people who live and work in North Yorkshire, driving future prosperity and much better opportunities that are so important to everyone.

“Whether it is improving skills and education, bringing in more investment to the region or helping improve transport links and providing much-needed affordable housing, the proposed deal would enable us to take far greater control of our own destinies.

“An elected mayor representing both York and North Yorkshire would be a powerful figure to have a seat at the table for further negotiations with the Government, bringing real and tangible benefits to the region.”

City of York Council’s leader, Cllr Keith Aspden, added: “This proposed deal is a significant milestone on the journey to secure devolution for York and North Yorkshire, and is undoubtedly a historic moment for our city, given the significant investment and powers this devolution deal can potentially bring to York and the wider region.

“Given its significance, I would encourage everyone in the city to take the opportunity to look at the details of this proposed deal, which could secure tens of millions of Government funding annually to support the local economy, invest in local businesses, drive innovation, particularly around initiatives such as BioYorkshire, and help improve the lives of our residents.

“Devolution represents a real opportunity to secure significant investment and powers for York and North Yorkshire, but we recognise that the deal has to be right for York.  That is why over the coming weeks and months, we will be engaging with residents, businesses and stakeholders to discuss the proposed deal, what it could mean for York and what the next steps are.

“This proposed deal has been agreed with Government, and North Yorkshire County Council, but will ultimately be considered by all Councillors at Full Council as to whether to hold a public consultation. If agreed by Councillors at that Full Council meeting, York businesses and residents will be invited to have their say on the details of the deal.”

Helen Simpson OBE, Chair of York & North Yorkshire Local Enterprise Partnership, said: "Devolution has the potential to unlock so many opportunities for our economy. This long-term investment will create significant economic opportunity and provides a chance to both address our challenges and realise the potential of York and North Yorkshire.

“We are the first genuinely city region and rural powerhouse deal and I look forward to the opportunity of working with the Mayor and our local leaders to make York and North Yorkshire greener, fairer and stronger.”

A mayoral combined authority would mirror similar arrangements that are already in place in areas including the Tees Valley and West Yorkshire.

Key areas of focus for the new mayoral combined authority would include unlocking additional investment for the region and supporting businesses as well as growing the economy and improving employment opportunities.

The combined authority would also oversee projects to build better digital and transport connections, along with providing more affordable housing and supporting action to reduce harmful carbon emissions, which contribute to climate change.

Under terms of the proposed deal, the mayor will be supported by the transfer of key powers and investment from Whitehall. Key features include:

The mayor will take on role and functions of the Police, Fire and Crime Commissioner.

Councils representing the City of York and North Yorkshire will remain, working to deliver vital services to residents with the combined authority having the responsibility for an over-arching vision.

A submission to pursue a devolution deal for York and North Yorkshire was submitted to the Government in 2020, and formal negotiations began at the start of this year.