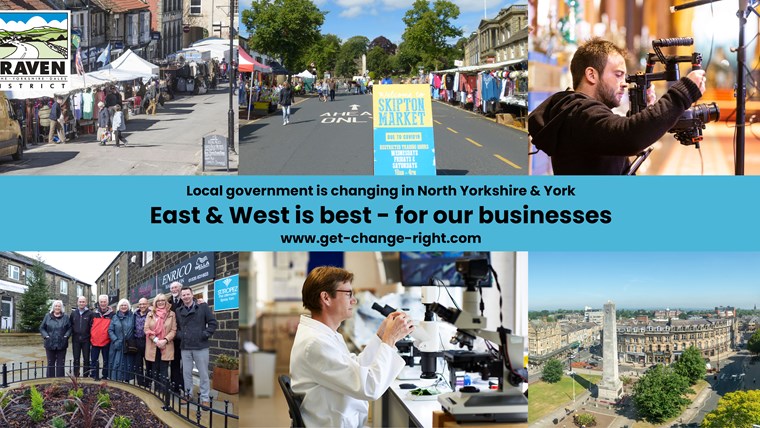 Businesses from across North Yorkshire are voicing their support for the East & West model of local government, which is being proposed by six district and borough councils.

The Government has told councils it will launch a consultation in February, on proposals to reorganise local government in North Yorkshire and York.

North Yorkshire County Council has submitted a different proposal, which would form a ‘mega-council’ across the whole of North Yorkshire, with a population of 618,000, leaving York as a separate, small unitary authority with just 211,000 residents.

More than 100 businesses from all across North Yorkshire have written letters of support for the East & West model. The model has also received extensive pledges of support from individual members of the public and voluntary and charity groups.

Roger Tempest, Custodian of the Broughton Hall Estate near Skipton, which houses a business park with more than 50 companies employing more than 700 people, said: “The East & West proposal gives local businesses a strong voice in a smaller geographical area, rather than creating a vast unitary authority covering the whole of North Yorkshire.

“Local authorities need to be close to their local businesses to offer tailored support, particularly as we face the huge challenges of recovering from the Covid-19 pandemic.”

Kevin Towers, MCEO of Techbuyer, a global leader in the provision of data based in Harrogate, said: “We are a high growth employer, planning to add another 100 jobs in the next three years. We believe the East & West model will offer many advantages to local communities and the business sector.

“It will enable more place-based local government and joined-up thinking on planning, transport and development that will help promote and support sustainable growth. Our experience of developing new business units in a number of different countries suggests that this is the best route to success.”

Mark Dawe at the Skills Network, one of the largest employers in the Selby district and a significant high-tech business, said: “The East & West model will deliver devolution to the region, act as a catalyst for growth and unlock the true potential of the city of York, while keeping local government ‘local’ and protecting the important links we have with businesses big and small.”

“Looking further forward to devolution, the East & West model would create a balanced Combined Authority, which will be more effective in delivering levelling-up and clean growth, attracting and retaining a younger workforce and expanding our strong skills base.”

The East & West proposal creates two unitary councils with balanced populations, demography and economic power; a model that delivers a number of benefits for businesses:

Councillor Richard Foster, Leader of Craven District Council, speaking on behalf of the Council Leaders, said: “Our East & West model will help drive recovery from the Covid-19 pandemic and build a better economic future for the whole area. It is the only proposal that delivers two equal partners to sit within a Mayoral Combined Authority – which is important for the success of devolution.

“District and borough councils already have a strong track record in bringing forward major economic development schemes for the benefit of our communities. Over the last five years, there has been nearly £900 million worth of investment projects delivered in the area.

“We know many of our businesses are concerned about the alternative bid for a ‘mega-council’ from North Yorkshire County Council, sitting alongside the much smaller existing unitary City of York Council, and would prefer the East & West model so that the full potential of devolution can be maximised. We hope their views will be taken into account when the Government launches its consultation.”