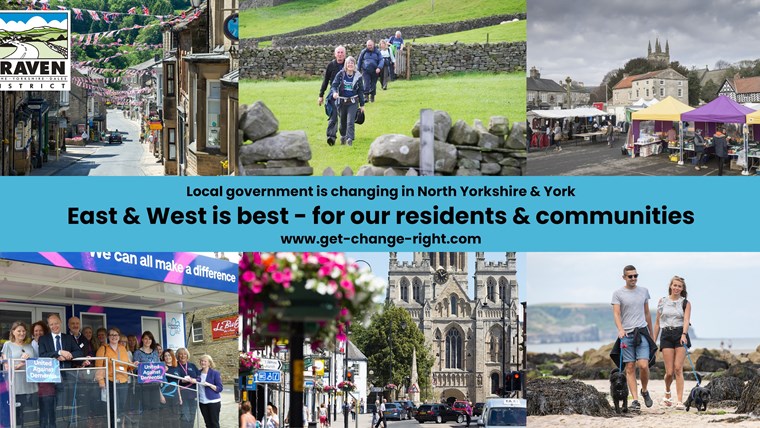 Residents, businesses and organisations are being encouraged to have their say in a Government consultation on the future of local government in North Yorkshire and York.

Last summer, the Government made it clear to local councils in North Yorkshire and York that they wished to see local government reorganised to form one-tier, unitary authorities.

The Government will shortly announce it will launch a consultation on proposals that have been put forward.

The six district and borough councils of Craven, Harrogate, Richmondshire, Ryedale, Scarborough and Selby have joined together to propose a balanced, East & West model of local government.

North Yorkshire County Council has submitted a different proposal, which would form one council across the whole of North Yorkshire, with a population of 618,000, leaving York as a separate, small unitary authority with just 211,000 residents.

Whilst a formal decision has yet to be announced, the Government has indicated that it is likely to consult on both proposals.

Councillor Richard Foster, Leader of Craven District Council, speaking on behalf of the Council Leaders, said: “We encourage everyone across North Yorkshire and York to make sure they are informed about these proposals, and have their say.

“We believe our East & West model is the best option for residents, businesses and communities. It will provide two balanced unitary authorities, large enough to make savings and operate strategically, but small enough to understand the needs of our people, places and communities.

“Our East & West model will help drive recovery from the Covid-19 pandemic and build a better economic future for the whole area.

“Over the last year more than ever, district and borough councils have proven the value of local knowledge. Across our six authorities, we have paid out more than 20,000 Covid-19 business grants, totalling over £200 million – we have been able to do this fairly and at speed, due to our understanding of our local economies.

“When our communities have been hit by other crises such as flooding, our local intelligence has enabled us to act fast to protect lives and properties.

“We know many of our residents and businesses don’t like the idea of the ‘mega-council’ that North Yorkshire County Council is proposing. They are worried about losing those local connections with their councils. That’s why we have drawn up the East & West model.

“The Government has assured us that responses to this consultation from any interested persons, including residents, town and parish councillors and local businesses are welcome – so please, make sure you have your say when the consultation launches.”

For more information about the East & West bid, go to www.get-change-right.com