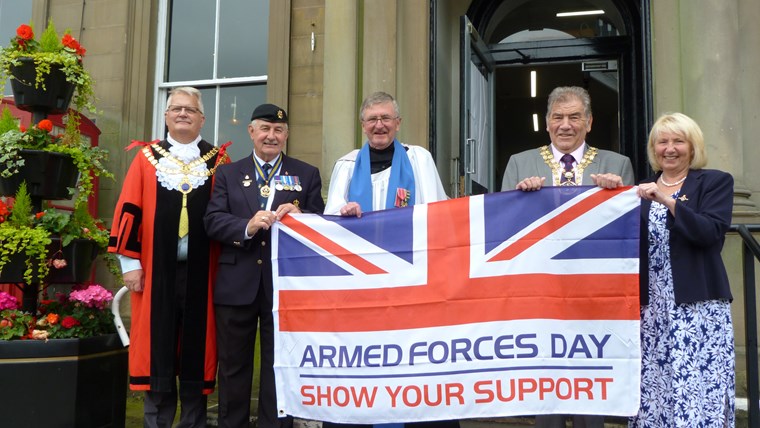 The Armed Forces Flag was raised at Skipton Town Hall on Monday June 24, to mark the start of Armed Forces Week.

The 5th Regiment Royal Artillery – the Yorkshire Gunners – paraded through Skipton High Street and the flag was then raised at 11am in front of veterans from the Royal British Legion.

Councillor Brockbank said: “On behalf of Craven District Council, Skipton Town Council and the Royal British Legion, I would like to give a special welcome to the men and women from 5th Regiment Royal Artillery, who have travelled from Catterick Garrison to be with us today to honour our Armed Forces veterans past and present.”

Barry Blood, President of The Royal British Legion in Skipton, said: “I’m so pleased to see so many people turn out in Skipton for the flag raising ceremony for Armed Forces Week 2019.

“The 5th Regiment Royal Artillery, Catterick Garrison, and the Piper and Drummer, the Brown brothers, did us proud once again. They will be here again in two weeks with their armoured vehicles and displays, on July 7, for the lowering of the flag, when I hope to see many members of the public and Royal British Legion in Skipton once more.”

The Armed Forces Flag will be lowered at 4pm on Sunday July 7, coinciding with Sheep Day in Skipton. It will be presented to RBL Bugler David Ellis.