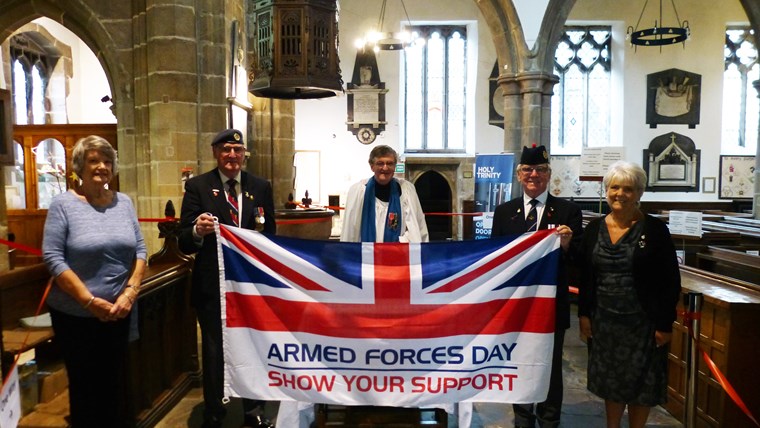 The Armed Forces Flag was lowered at Holy Trinity Church in Skipton on Saturday June 27, and presented to Harry Dowson, the Skipton Standard Bearer.

The flag was lowered in a small, socially distanced ceremony, organised by Craven District Council and the Royal British Legion late in the day to avoid crowds gathering.

The event was filmed by Craven District Council so that members of the public could view the Flag lowering ceremony safely.

Mr Dowson, 85, joined the Royal Air Force aged 17 and was posted to RAF Changi driving both domestic and crash ambulances.

After moving to Skipton and marrying his wife Arlene, he joined the RAFA committee in 1967 and in 1989 became chairman until its closure this month.

Mr Dowson has been a member of The Skipton Branch of the Royal British Legion since the early 60s and since 1987 has carried the National Standard, missing only one parade during that time due to a ‘poorly leg’. He also spent some time as a committee meeting and he still has his committee badge.

Both Mr and Mrs Dowson were actively involved in raising money for the ‘Wings Appeal’ and have managed to raise in excess of £250,000. They have also been involved for the last six years helping raise money for the ‘Poppy Appeal.

George Martin, Chairman of the Skipton Branch of the Royal British Legion, said: “Their contribution to the Royal Air Force Association is absolutely incredible. On behalf of Skipton, and Craven district, it is my pleasure, Harry, to invite you to receive this flag on behalf of the town. Thank you for your service to your country, to your town, and to the Associations within the town.”

Councillor David Ireton, Craven District Council’s Armed Forces Champion, said: “Armed Forces Day is an occasion for us all to show our support to the men and women who make up our Armed Forces Community: from currently serving troops to Service families, veteran and cadets. It is worth remembering that every day the Armed Forces defend the UK and its interests working around the world.

“For the last five years we have welcomed this opportunity to publicly celebrate the work of our Armed Forces but unfortunately due to the coronavirus outbreak, this years Armed Forces Day events have had to be cancelled and instead we are asking you join us in showing your respect for our Armed Forces from your homes.

“We have been flying the Armed Forces Flag in Skipton all week and I would like to thank Reverend Roger Lowans and Holy Trinity Church for stepping in to fly the flag from the church tower as our Town Hall Flag Pole is currently undergoing refurbishment.

“I would like to thank everyone who has helped to organise and taken part in our virtual online flag raising and lowering commemorations.

“I hope that next year we will be able to come together again to celebrate both Armed Forces Day and the 5th Regiment Royal Artillery Freedom Parade.

The video of the Armed Forces Flag Raising can be viewed on Craven District Council’s YouTube channel at https://www.youtube.com/channel/UCdfb6ZRbYnZ1-rRliLmjUwg

Armed Forces Day takes place on the last Saturday each June and is a chance for people to show their support for the men and women who make up the Armed Forces community: from currently serving troops to Service families, veterans and cadets.

This year, as public events have been cancelled due to the coronavirus outbreak the public have been encouraged to show their support from their homes.