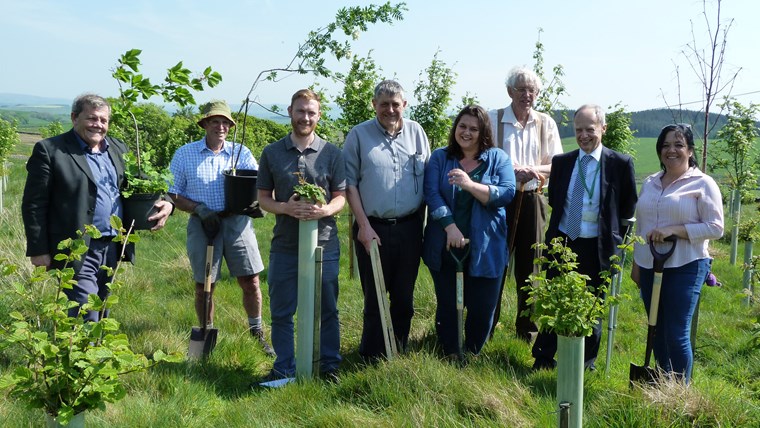 The winners of Craven’s first Green Apple Awards have been announced by Craven District Council.

Keelham Farm Shop were picked out as Gold Award winners by the judges, with Hebden Parish Council receiving a Silver Award, and Settle Hydro and North Yorkshire County Council both receiving Bronze Awards.

They will go forward to the International Green Apple Awards programme, and the Council has made a donation on their behalf to the Dales Woodland Restoration Programme, run by the Yorkshire Dales Millennium Trust (YDMT).

Councillor Carl Lis, lead member for Greener Craven, said: “We launched these awards to recognise, reward and promote environmental achievements across the district.

“It was fantastic to see so many great entries and to hear about all the environmentally-friendly work going on around our district.

“We’re also delighted to be able to support the Yorkshire Dales Millennium Trust as they aim to create beautiful woodlands around the district for future generations to enjoy.”

Keelham Farm Shop’s Veg Exchange programme lets customers bring home-grown surplus fruit and veg to Keelham where it is sold on their behalf, in return for credit. Now in its tenth year since it started at Keelham’s Thornton shop, the Craven community has taken the scheme into their hearts, and there have been 634 Veg Exchange transactions at the Skipton shop since it opened in 2015.

Victoria Robertshaw, founder of Keelham Farm Shop, said: “This is already my favourite award! Sustainability and the environment is so important to Keelham in what we do every day. It’s brilliant that the council have held these awards. The fact that we’ve won this award for the Veg Exchange scheme is all thanks to the people of Craven for embracing it – this wouldn’t have worked without our customers.”

Hebden Parish Council was given the award for Hebden Community Woodland, a new scheme on part of the village’s High Green. Villagers planted 100 trees including oak, small-leaved lime, rowan, hawthorn and holly. It was funded by £1,000 from the Yorkshire Dales Millennium Trust, made possible by a generous donation from Major Robin Tarr and his sons, in memory of his late wife Jennie, who had a love of trees and the Dales.

David Joy, chairman of Hebden Parish Council, said: “It’s been a really great pleasure and surprise to receive the award – it takes me back to planting out those 100 trees in terrible November weather, and makes it all worthwhile.”

Paul Gilmore, electrical engineering manager at North Yorkshire County Council, said: “It is extremely gratifying to receive the Green Apple award which recognizes both the environmental benefits of the LED programme and the efforts of the County Council’s street lighting team together with its contractor, Ringway Infrastructure Services, who have exceeded the Council’s expectations in the delivery of this energy saving initiative.”

Sandy Tod, of Settle Hydro, said: “We are delighted to win a Green Apple Award.  Settle Hydro has not only demonstrated how community groups can access low carbon renewable energy, but it has also acted as an exemplar to later projects adopting the same technology, and judging by the number of visitors it has attracted, has helped to educate people about environmental issues.”

YDMT has worked with landowners and partners including Yorkshire Dales National Park Authority, Forestry Commission and Woodland Trust to plant around 1.4 million new trees, creating hundreds of new woodlands. The charity also works with disadvantaged groups such as young carers, homeless people, refugees and asylum seekers, to give them access to the Yorkshire Dales.

“Trees are vital to so many aspects of life. As well as providing habitats for wildlife, reducing flooding and helping to combat climate change, we know that trees help to reduce stress and anxiety and promote a healthier lifestyle.

“It is really inspiring to see local organisations making a real difference to the environment in new and creative ways through the Green Apple Awards.”

The Craven awards scheme is being supported by The Green Organisation, which runs the International Green Apple Awards.